Hey Arnold! follows the adventures of Arnold and his friends, most of them taking place in their neighbourhood. What made the cartoon series a success were the range of stereotypical characters that appear in the show.
Arnold with the happy-go-lucky personality would encounter problems and scenarios that he needed to overcome. He is usually accompanied by his best friend Gerald, an African American with a funky afro and classmate Helga, who is seen constantly bullying Arnold to hide her secrecy of having a crush on him.
There are many other classmates that appear throughout the series. The more memorable ones include Binky, the bully of the show of Jewish descent who also has a soft spot behind his mean demeanor, Phobe who is of Japanese origin and the smartest in the class, Eugene, known for his nerdiness and Lila, a farm girl whom Arnold has a crush on, just to name a few.
I was not aware that they had made episodes for the series up to 2004 and since having enjoyed watching the show so much, I'm going to be getting myself a copy of the series to wax nostalgic. 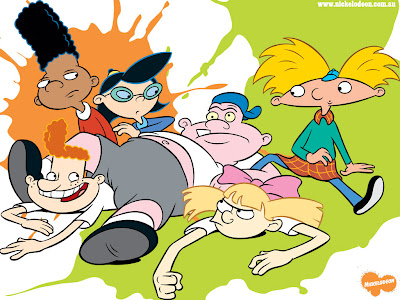