Forget Forza or Gran Turismo, racing games where you can use projectiles to one up your opponents is where it's at. Racing genres that plays well in 2D is hard to come by, but Super Mario delivers with finesse and precision. 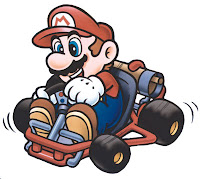 You choose from eight racers, all whom are taken from the Mario series. They include Mario himself, Luigi, Princess Peach, Yoshi, Bowser, Donkey Kong, Koopa and Toad, each of them with different stats. I always went with Koopa. Although weak and very liable to being bumped off track when colliding with other racers, he had the speed. That turtle can race! Expanding from the Mario series concept, various question mark boxes are scattered throughout the courses. Running over one of these allows you to gain an offensive or defensive object which you can utilise to help you win the race. Weapons include bananas, tortoise shells, invincible stars and probably the most annoying of them all, thunderbolts. Using this ability rendered all racers except the caster to become tiny, slowing down their speed and running the risk of being flattened by the non affected racer.
The game play made it easy for players to get into and the multiplayer mode made it a great party game. Super Mario Kart went on to become the best selling game on Super Nintendo and appears in many lists as the best ranking game of all time.
The franchise went on to create a series of successful sequels, improving game play, introducing new characters, maps and weapons and allowing for more players to join in on the fun. I still have my Super Nintendo and Mario Kart cartridge and I must say, there is no greater way to unwind then to sit down and spend a few solid hours overlapping computers on this oh so awesome game.