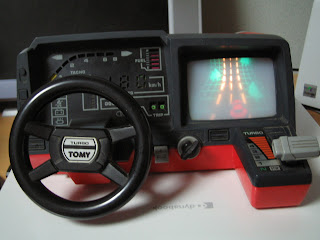 Nostalgia more?
I never owned this toy but a friend of mine had one of this, and I was indeed very jealous. The Turbo Racing Cockpit manufactured by Tomy allowed players to steer a racing car that can be seen on the monitor. It featured a steering wheel, ignition key and an accelerator stick. You never really crash or die, it's just rev it up and go. Toys don't get cooler than that.
Having done some research into this toy, it was actually made in the 80s, but it makes an appearance on this blog due to its life through to the 90s. Shine on Tomy.